You are here:
Billet Box Blog

OK, Here’s a quick post with photos of the Dead Flipper I got yesterday! When I found it, I posted an updated article about the Dead Flipper that explained the significance of the model the other day. Check it out.

Here is a video I took right as I took it out of the packaging.

As you can tell from the video, I was like a kid on Christmas morning. I knew it was going to be in great shape, but I was blown away at how MINT it was. Don’t judge me.

After talking with the seller, I found that it was purchased from Billet Box Vapor for $600 back in 2016. As I mentioned in the other article, they were sold on May 31st, 2016 for $604.33. I am going to assume that this is when the Dead Dolphin, called the BlackFlip back then, was purchased on that date. The seller said it was only used a few times and has been sitting around since. The photos that were sent to me confirmed the condition and I bought it. I was not disappointed.

I decided to crack the inners and see how the boards looked and was equally impressed. Very clean, especially for a 4 year old Billet Box.

This is like one of those classic car garage finds. So happy with it. This one will probably never leave the house. Even though I have had some really nice offers to buy it from me, I am not interested. Thanks though. 🙂

Now, I guess it’s time to find a FawkesFlip! 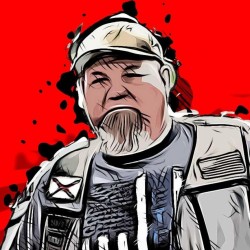 Follow Me
Chris
Chris is a 7 year vaper that recently fell down the Billet Box Rabbit hole and saw a need for a site to share his experiences and all the info he has gathered in order to help others along the way.